If you followed my picks for your daily fantasy team last week, chances are you won some money! Last week I hit on 4 out of 5 picks with double digit games. Three of those guys — QB Pat Mahomes, RB James Conner, and TE Eric Ebron — finished in the top-5 for their respective positions in fantasy points.

Another weekend is approaching and we are again introducing our 5 under-the radar-picks for Week 2 of the NFL season. Let me help make you make your Sunday a little easier.

Here are 5 picks for your DraftKings lineup this week.

After a tough preseason for Keenum, it was refreshing to see that he still had it last week. While he did throw 3 interceptions, the 3 touchdowns he threw made fantasy owners ecstatic.

Completing 25 passes for 329 yards, Keenum primed for a big Week 2. Keenum goes up against an Oakland Raiders team that surrendered 225 passing yards at an average of 7.1 yards per completion.

Look for Keenum to put up points, as his salary at $5,800 makes him an ideal low risk/high reward guy. 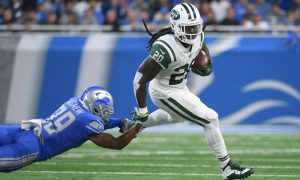 Isaiah Crowell began his Jets career with a bang. In New York’s blowout win against the Detroit Lions this past Monday, Crowell rushed for 102 yards and 2 touchdowns on just 10 carries.

While Crowell split time with RB Bilal Powell, Crowell had a much larger impact the game and is expected to get more carries possibly this week. Crowell goes up against a Miami Dolphins team that gave up 336 yards last Sunday, with 116 of those yards coming from the ground game.

While Isaiah Crowell may not be the sexiest option, he definitely has the potential to be an RB2 or flex player in your lineup for a low cost, especially if this week is anything like Week 1. 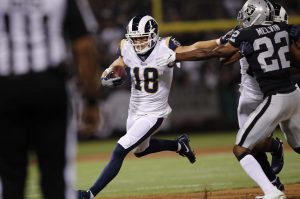 Cooper Kupp played a pivotal role in the Rams win this past Monday night. The slot receiver racked up 5 catches for 52 yards and 1 touchdown, which ended up being the go-ahead touchdown in what was a tight game for the better part of 3 quarters.

While 5 catches may cause some skeptics to think twice, Kupp averaged 10.4 yards per catch and was actually targeted 9 times which is very encouraging.  He’s also going up against an Arizona Cardinals defense that coughed up 429 yards last week with 247 of those yards coming through the air.

Kupp is definitely an option at either the WR2 or WR3 spot, especially with his cost being relatively low. Stacking Kupp with QB Jared Goff is a good move against a pitiful Cardinals defense. 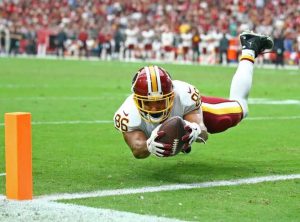 If Jordan Reed showed us anything this past Sunday it’s that when he’s healthy he can be one of the best tight ends in the league. Reed hauled in 4 passes for 48 yards and a touchdown last week.

While Reed only saw 5 targets, he averaged 12 yards a catch and, as the season goes on and he becomes accustomed to taking more snaps, look for his volume to go up. After all, he hadn’t played since Week 8 of last season.

Reed faces an Indianapolis Colts defense that gave up 330 yards last week, 229 of those yards were given up through the air. Look for Reed to have more of the same type of game this week against the Colts. At $5,000, Reed is an excellent choice for your TE slot. 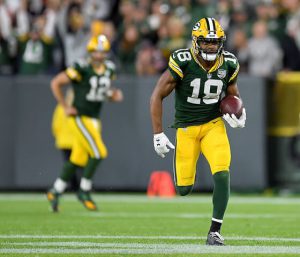 While many may consider this a homer pick (that’s right folks, Big Paulie is a cheesehead), Randall Cobb is primed for a big game against the Minnesota Vikings solely based off of the events that took place this past Sunday night.

As we watched Aaron Rodgers go down with what looked like a serious injury and later return for a comeback win, Cobb played an enormous role on the receiving end. He finished the game with a gaudy stat line of 9 catches, 142 yards, and a touchdown, averaging 15.8 yards per catch.

Cobb thrives in the short pass game and is always a threat for big yards after the catch. Look for more of the same this week as Rodgers’ mobility will likely be limited to staying in the pocket and needing to get off quick throws, which Cobb is perfect for.

At $4,600, Cobb is a player you should 100% be looking at to fill your flex spot and should definitely be considered as a WR2 or WR3 this week.

For a more in-depth analysis, check out our very first Joker Mag podcast (The Name This Podcast Podcast). We need a name. Obviously.